“Trust no one.” Or at least that’s what Fox Mulder told me back in the 90s.

With the recent GA of HTTP APIs for API Gateway, I decided to start evaluating my existing API Gateway REST APIs to see if I could migrate them over to take advantage of the decreased latency and reduced cost of the new HTTP APIs. Several of them were disqualified because they utilize service integrations (a feature that AWS is working to add), but for one of my largest applications, the lack of Custom Authorizers is what brought me to a dead end. Or so I initially thought. 😉

After a bit of research (okay, it was actually several hours because I decided to read through a bunch of specs and blog posts and then run a ton of experiments), it turns out that hosting your own OIDC Conformant “server” to verify self-signed JSON Web Tokens with HTTP APIs is actually quite simple. So as long as you can use JWT for your bearer tokens, you can utilize your existing authentication service (and probably dramatically reduce your latency and cost).

In this post, I’ll show you everything you need to know to set this up yourself. We’ll generate certificates, create our OIDC discovery service, set up our HTTP API authorizers, generate and sign our JWTs, and protect routes with scopes.

END_OF_DOCUMENT_TOKEN_TO_BE_REPLACED

I posted a thread on Twitter with some thoughts on how to how to switch from RDBMS to DynamoDB. Some people have asked me to turn it into a blog post to make it easier to follow. So here it is… with some bonus steps at the end. Enjoy! 😁

I've been spending a lot of time lately with @dynamodb in my #serverless applications, so I thought I'd share my surefire guide to migrating to it from #RDBMS. So here is…

END_OF_DOCUMENT_TOKEN_TO_BE_REPLACED

In the serverless world, we often get the impression that our applications can scale without limits. With the right design (and enough money), this is theoretically possible. But in reality, many components of our serverless applications DO have limits. Whether these are physical limits, like network throughput or CPU capacity, or soft limits, like AWS Account Limits or third-party API quotas, our serverless applications still need to be able to handle periods of high load. And more importantly, our end users should experience minimal, if any, negative effects when we reach these thresholds.

There are many ways to add resiliency to our serverless applications, but this post is going to focus on dealing specifically with quotas in third-party APIs. We’ll look at how we can use a combination of SQS, CloudWatch Events, and Lambda functions to implement a precisely controlled throttling system. We’ll also discuss how you can implement (almost) guaranteed ordering, state management (for multi-tiered quotas), and how to plan for failure. Let’s get started!

END_OF_DOCUMENT_TOKEN_TO_BE_REPLACED

An extremely useful AWS serverless microservice pattern is to distribute an event to one or more SQS queues using SNS. This gives us the ability to use multiple SQS queues to “buffer” events so that we can throttle queue processing to alleviate pressure on downstream resources. For example, if we have an event that needs to write information to a relational database AND trigger another process that needs to call a third-party API, this pattern would be a great fit.

This is a variation of the Distributed Trigger Pattern, but in this example, the SNS topic AND the SQS queues are contained within a single microservice. It is certainly possible to subscribe other microservices to this SNS topic as well, but we’ll stick with intra-service subscriptions for now. The diagram below represents a high-level view of how we might trigger an SNS topic (API Gateway → Lambda → SNS), with SNS then distributing the message to the SQS queues. Let’s call it the Distributed Queue Pattern.

This post assumes you know the basics of setting up a serverless application, and will focus on just the SNS topic subscriptions, permissions, and implementation best practices. Let’s get started!

END_OF_DOCUMENT_TOKEN_TO_BE_REPLACED

Writing serverless functions brings developers closer and closer to the stack that runs their code. While this gives them a tremendous amount of freedom, it also adds additional responsibility. Serverless applications require developers to think more about security and optimizations, as well as perform other tasks that were traditionally assigned to operations teams. And of course, code quality and proper testing continue to be at the top of the list for production-level applications. In this post, we’ll look at how to add test coverage to our Node.js applications and how we can apply it to our Serverless framework projects. ⚡️

END_OF_DOCUMENT_TOKEN_TO_BE_REPLACED 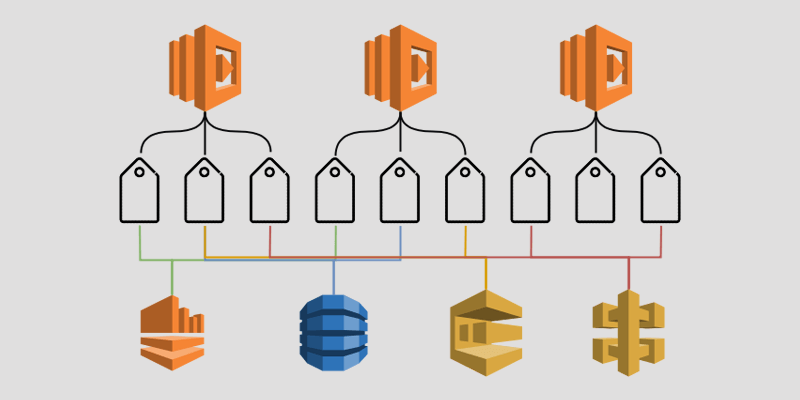 As our serverless applications start to grow in complexity and scope, we often find ourselves publishing dozens if not hundreds of functions to handle our expanding workloads. It’s no secret that serverless development workflows have been a challenge for a lot of organizations. Some best practices are starting to emerge, but many development teams are simply mixing their existing workflows with frameworks like Serverless and AWS SAM to build, test and deploy their serverless applications.

Beyond workflows, another challenge serverless developers encounter as their applications expand, is simply trying to keep all of their functions organized. You may have several functions and resources as part of a microservice contained in their own git repo. Or you might simply put all your functions in a single repository for better common library sharing. Regardless of how code is organized locally, much of that is lost when all your functions end up in a big long list in the AWS Lambda console. In this post we’ll look at how we can use AWS’s resource tagging as a way to apply structure to our deployed functions. This not only give us more insight into our applications, but can be used to apply Cost-Allocation Tags to our billing reports as well. 👍

END_OF_DOCUMENT_TOKEN_TO_BE_REPLACED

I often find myself creating four separate stages for each ⚡ Serverless Framework project I work on: dev, staging, prod, and local. Obviously the first three are meant to be deployed to the cloud, but the last one, local, is meant to run and test interactions with local resources. It’s also great to have an offline version (like when you’re on a plane ✈ or have terrible wifi somewhere). Plus, development is much faster because you’re not waiting for round trips to the server. 😉

A really great feature of Serverless is the ability to configure ENVIRONMENT variables in the serverless.yml file. This lets us store important global information like database names, service endpoints and more. We can even reference passwords securely using AWS’s Service Manager Parameter Store and decode encrypted secrets on deployment, keeping them safe from developers and source repositories alike. 😬 Just reference the variable with ${ssm:/myapp/my-secure-value~true} in your configuration file.

END_OF_DOCUMENT_TOKEN_TO_BE_REPLACED

Since AWS released support for Node v8.10 in Lambda, I was able to refactor Lambda API to use async/await instead of Bluebird promises. The code is not only much cleaner now, but I was able to remove a lot of unnecessary overhead as well. As part of the refactoring, I decided to use AWS-SDK’s native promise implementation by appending .promise() to the end of an S3 getObject call. This works perfectly in production and the code is super compact and simple:

The issue came with stubbing the call using Sinon.js. With the old promise method, I was using promisifyAll() to wrap new AWS.S3() and then stubbing the getObjectAsync method. If you’re not familiar with stubbing AWS services, read my post: How To: Stub AWS Services in Lambda Functions using Serverless, Sinon.JS and Promises.

END_OF_DOCUMENT_TOKEN_TO_BE_REPLACED

Someone asked a great question on my How To: Reuse Database Connections in AWS Lambda post about how to end the unused connections left over by expired Lambda functions:

I’m playing around with AWS lambda and connections to an RDS database and am finding that for the containers that are not reused the connection remains. I found before that sometimes the connections would just die eventually. I was wondering, is there some way to manage and/or end the connections without needing to wait for them to end on their own? The main issue I’m worried about is that these unused connections would remain for an excessive amount of time and prevent new connections that will actually be used from being made due to the limit on the number of connections.

🧟‍♂️ Zombie RDS connections leftover on container expiration can become a problem when you start to reach a high number of concurrent Lambda executions. My guess is that this is why AWS is launching Aurora Serverless, to deal with relational databases at scale.

Update September 2, 2018: I wrote an NPM module that manages MySQL connections for you in serverless environments. Check it out here.

Overall, I’ve found that Lambda is pretty good about closing database connections when the container expires, but even if it does it reliably, it still doesn’t solve the MAX CONNECTIONS problem. Here are several strategies that I’ve used to deal with this issue.