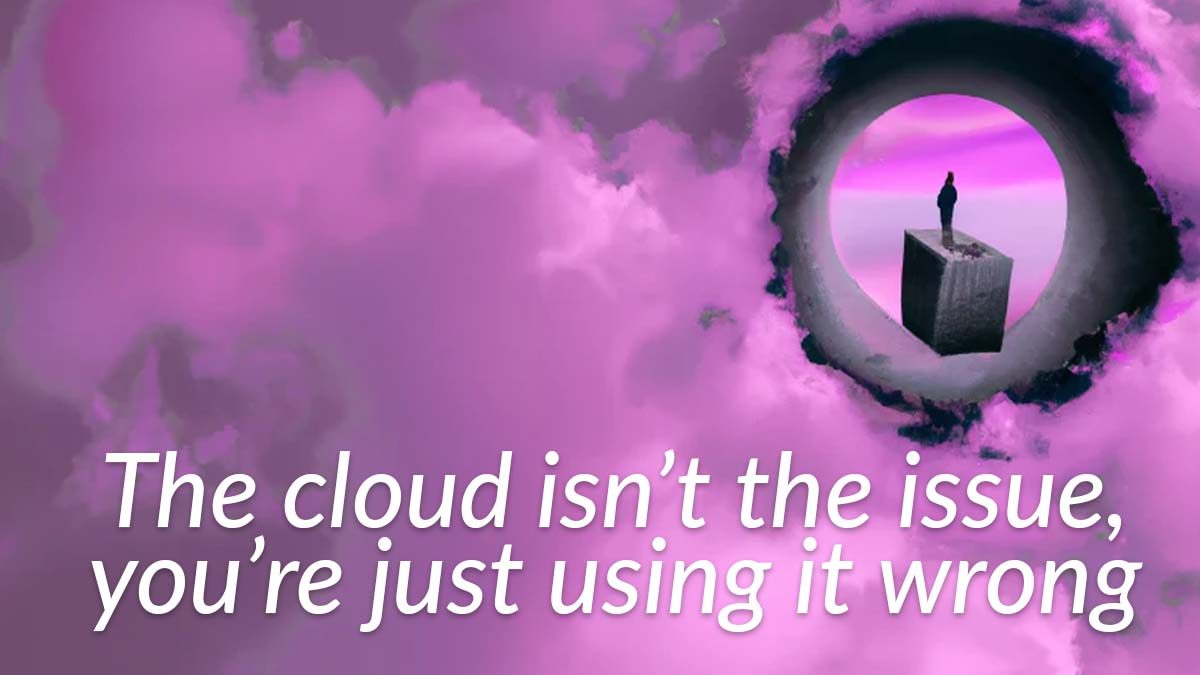 #Tech Twitter was all abuzz recently after DHH boldly proclaimed and explained why [37signals is] leaving the cloud. A lot of people cheered, some of us jeered, and everyone else just pitched web3 as an alternative solution. DHH’s success has earned him a giant platform and a tremendous amount of influence, and while I often disagree with him, it’s clear that many others do not. I spent quite a bit of time reading through all the retweets, reposts, comments, and hot takes, and I came to a fairly simple conclusion: these people are using the cloud wrong.

There is much to get to here, but let’s start with this quote from DHH’s article:

We’ve run on bare virtual machines, we’ve run on Kubernetes. We’ve seen all the cloud has to offer, and tried most of it.

I’m just going to come right out and say it: if you’re running VMs or Kubernetes in the public cloud, you’re almost certainly doing it wrong. Of course “the savings promised in reduced complexity never materialized,” because you’re literally just renting hardware and managing it yourself. You can’t reduce complexity if you’re unwilling to hand any of that complexity off to the cloud provider. Using the cloud like it’s just a datacenter for VMs is not, was not, and never will be its true purpose. The vision has always been to change the way we build and run applications, not to poorly scale the old way of doing things.

In the cloud, we should be renting services, not servers. Meeting customers where they were/are was a brilliant strategy for getting those early cloud adopters to trust the ecosystem, but now it’s become a handicap that signals acceptance of a practice that should have gone extinct years ago. As I’ve said, the cloud won’t reach its full potential until we start building apps that are designed for the public cloud. Otherwise, people will continue to fail and fall victim to DHH’s ignorance.

One of the best rebukes of DHH’s post was by Simon Wardley in the following Twitter thread:

X : Did you see "Why we're leaving the cloud" – https://t.co/bHGzZzTdny
Me : Nope.
X : And?
Me : Why are you talking infrastructure clouds to me? This is 2022. You should have migrated to severless years ago. I'm not interested in niche edge cases.

If you haven’t read it, you really should. It points out a number of factors that DHH conveniently doesn’t account for, for example:

Last time I ran numbers on this (circa 2010) then hardware and software is normally around 20% of the cost. The rest is made up of electricity, cooling, building, physical security, racking, UPS, opportunity cost … long list.

I was in the same boat back in the late 2000s. The cost of servers and software was minimal compared to colocation space rental and its associated utilities. Not to mention that running everything in a single datacenter is a terrible idea. With serverless services, you get multiple availability zones for free, plus all those other things Simon mentioned, included in your per millisecond or invocation cost. Also, has DHH given any thought to sustainability, or did he ban that topic too?

Of course it’s more expensive if you don’t account for your Total Cost of Ownership (TCO). Hiring experts capable of providing the operational excellence of the cloud is certainly possible, but if you think you can get that for less than $500k/year, you might want to check your math.

So maybe it’s just about control? Or maybe it’s just about the controversy? Either way, as interesting as Basecamp and HEY are, the likelihood of them needing to create specialized services to run a SaaS app and an email search service is highly unlikely. And this is where Simon really hits the nail on the head:

The largest delusion is usually the number of people thinking that they’re one of the special cases / niches.

37signals could be a special case, though I highly doubt that they are. They, and millions of others, continue to abuse the cloud every day by treating it like a virtual colocation facility. And, yes, Amazon, Azure and Google are printing money, so they’re happy to be complicit. I doubt DHH’s decision will move the needle unless they can prove they made the right choice. But until we realize the full potential of cloud, it’ll continue to cast doubt in the minds of the people it will most benefit.

ALSO: I had some fun by writing a parody of DHH’s post: Why we’re leaving the electric grid.

🗓 This post was originally published on November 10, 2022 by Jeremy Daly.