Getting valuable content from your social streams has become increasingly more difficult with all the noise out there. Learn how I curate my content feeds with a few tips, tricks, and interesting (Twitter) analysis, to get the most out of each platform.

Whenever I have a free minute (usually during my morning coffee, stretching after a run, or waiting for my burrito order to be ready), I’ll take out my phone and look for something actually worth reading. Between Facebook, Twitter, Medium, CNN.com, TechCrunch, Mashable, and others, I always have plenty of content to choose from, but often my few minutes of reading time turned into my few minutes of filtering time. My ability to consume content, rather than just read the headlines, became a crap shoot. Most of the time if I find something even remotely interesting I start to read it, and then quit after the first few paragraphs if I misjudged it. Great, more time wasted.

I had developed a terrible habit during my quick phone checks. First I’d check my email (quickly), and then I’d go straight to my Facebook app. This was my routine for over a year. When I finally realized I needed to cut out time waster, Facebook was at the top of my list. I analyzed the content, and other than for a few of my close friends, I found that I had very little interest in the status updates and photos of acquaintances, and even less interest in the ads and the plethora of social shares that inundated my News Feed.

But I could quit Facebook, I knew that. All of my close friends are on there. Plus, my mother is on Facebook, and since she’s not on Instagram (btw, please don’t tell her about Instagram 🙂 ), if I didn’t share photos of my kids on Facebook, I’d have to email them to her (is that still a thing?). Anyway, I knew I had to do something to break the habit, so my solution was to remove the trigger. For me, the trigger was the Facebook app icon on the home screen of my iPhone. Every time I woke up my phone’s screen, there it was, staring me in the face. Again, I knew I couldn’t delete the app, that seemed excessive, so I did what I’ve done to other apps I find mostly useless and rarely use, I put it in an app folder on another screen. Now if I want to open the Facebook app, I either need to search for it, or go to the folder on a distant page, open it, and then click on Facebook.

I’m proud to say that it worked miracles. So much so that I’ve clearly angered the Facebook algorithms to the point where they now send me several emails to remind me that I have notifications, friend requests, and messages. Sorry, Facebook, but adding friction to our relationship was just what I needed to see that there were other (much better) options out there. Sure, I still check in from time-to-time, but we’re not longer going steady.

I understand that Facebook has several ways to filter your feeds, and of course, you could always defriend or block people, but at the end of the day, the quality of the content just didn’t work for me. That’s why I moved on.

So now that I had Facebook in my rearview mirror, I needed to find another source for interesting content. For a while, I had tried Medium. Don’t get me wrong, I really liked Medium, I still do, but I found the organization of the content to be somewhat limiting. Your “Reading List” is based on people you follow and their recommendations. I guess if you’re very specific about the people you follow then this might work for you, but for me, I found myself over-filtering.

After Medium, I moved back over to Flipboard. I’ve been a Flipboard user for years. I actually installed Flipboard as one of the first apps when I got my first generation iPad all those years ago. However, two years or so ago, I stopped using it regularly. The magazine format was certainly clever, but I found myself digesting the same content from Twitter and Facebook. It seemed redundant since I was a heavy user of the apps that fed it. Then not too far back, they changed their system to curate content for you based off of interests, rather than who you follow and their recommendations. So I gave it a try.

I installed the new version and went through their (lengthy) set up process. It presented me with literally 100s of topics and categories to choose from. I didn’t mind spending the time going through it. The process seemed so thorough, that I felt like I was in full control and that the reward for doing this work would be totally worth it. When I was finished the setup, and it started serving me stories, I was absolutely blown away.

The content is exactly what I want to see. Furthermore, the layout and UX of the Flipboard app makes the limited amount of filtering that I have to do extremely simple. In the iPhone app, it features only one or two stories at a time with a bit of teaser text, allowing me to dig a little deeper before opening the full article. Once I click into an article, I often find that I don’t have time to read the whole thing. Flipboard makes it super simple to “flip” a story into one of your magazines, which are just folders for you to organize save bookmarks.

I now use Flipboard as my default app for finding new articles to read, but I also like to consume more traditional “news” as well. Flipboard has a lot of interesting and thought-provoking articles, which is what I want it for, but other startup and industry news is somewhat lacking.

I’ve never been a heavy Twitter user, but mostly because it was just a ton of noise. I’ve maintained accounts for every startup I’ve been involved with, and I’ve had plenty of success with it as a communications tool. But as a simple feed consumer, I’ve always found it difficult to extract true value. Companies are often posting and reposting the same spun content over and over again. The few “real” people on Twitter are either retweeting everything they read, or they’re barely tweeting at all. Add a few “news” sites to your following and you’re sure to have a big stream of noise that you have to waste time parsing and filtering.

But I still love Twitter, and here’s why. If you take the time to parse through all the noise, there are some amazing things happening there. Twitter is realtime; you can literally watch events unfold. You can catch a whiff of a hashtag and find entire subcultures with thousands of voices that resonate with you. You can interact with other people and companies in a global forum open to everyone. Twitter is a research tool that you can search to your heart’s desire. When I have time, I like to dig around and see what I can find, and I’ve found some very interesting things.

Despite all the wonderful things Twitter is good for, reading stories in your Home feed isn’t one of them. Unfortunately, I haven’t found the silver bullet, but I have found some ways to make it more palatable.

First of all, you can use lists. Twitter lists are great for organizing the people you follow into categories. You can then view just that list, which will only show you tweets from people on that list. It should be better than it actually is, but in reality, they’re kind of clunky. In the iOS app, it takes four clicks to filter by a list. It’s even more of a pain to add someone to a list. I think they’re useful to have, but it won’t solve your problem.

The second thing you can do, is to simply stop following over-tweeters. People who retweet 20 articles a day (that you don’t find interesting) are probably the first ones to go. Also, companies that are shamelessly promoting themselves all the time become annoying. New blog post? New product feature? Special offer? Sure, those might be useful, but when a company tweets too many times a day, I’m usually inclined to drop them. Last one, personal friends. This may sound harsh, but I use Twitter more professionally than personally, so reading tweets from friends just seems redundant. If I wanted to see what my friends are up to, I’ll check Facebook (or maybe text them).

Lastly, and especially if you’re looking for news like I am, explore the sub-accounts (I may have just made that up) for the bigger news sources. For example, look at the partial list of Mashable‘s Twitter accounts below:

There are several sub-accounts that categorize stories for you. This lets you pick and choose the categories of stories you’re interested in while cutting down the clutter. How much clutter you ask? Look at the chart below. Mashable’s main account @Mashable, sends out an average of 58 tweets per day. However, if you were interested in just Social Media, Tech and Startups, you would only get about 19 tweets per day. I’ve always been a big fan of Mashable, but in their battle to create more content, their site is sometimes overrun with useless, uninteresting stories. The sad thing is that there is gold buried in there if you’re willing to look for it. With Twitter, however, you can filter out most of the junk automatically by only following the sub-accounts that you’re interested in.

CNN also has several sub-accounts, but unlike Mashable, they tend to tweet aggressively for each of their main topics. The main @CNN account tweets ~66 per day, @CNNPoltics, over 70 tweets per day. Some of the smaller niches, like @CNNTech, however, only tweet a few times per day. 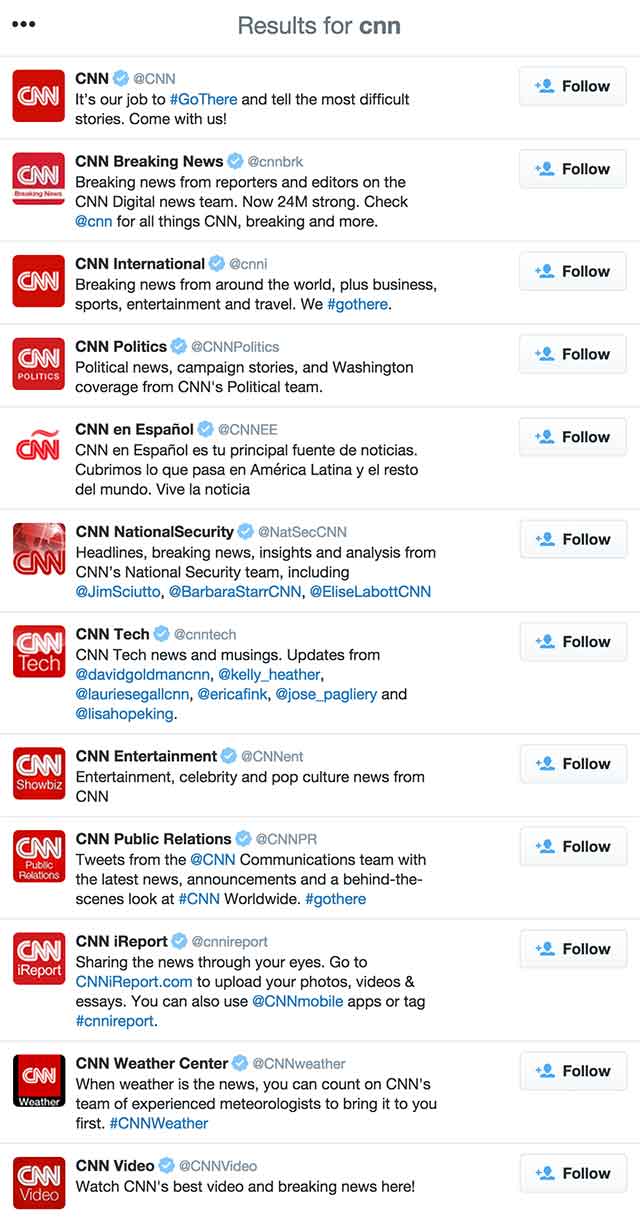 While I’m not sure I want to make the leap and classify BuzzFeed as a “news” site, I’ve included it here because it has several hyper-focused topics broken down into sub-accounts. Below is a good sample of the types of topics that BuzzFeed curates for Twitter. There is everything from quizzes to comics to animals, so if this is your kind of bag, then there are plenty of options for you.

These are the strategies I use to streamline my content consumption and make more out of my reading time. Are there better ways to do this? Did I miss something? Let me know.

🗓 This post was originally published on March 8, 2015 by Jeremy Daly.